I haven't written here in a very long time, because I've been entirely at a loss as to what to say. After the teacher strike of 2014, when we, 'negotiated' a settlement that our provincial government promised to fund, many of us hoped things would get just a little better. Those people proved to be the relentless optimists among us: the people who see sunshine and unicorns dancing in the clouds, waiting to bestow their largesse on a beleaguered humanity.

I wish they had been right. I truly do. But consistent with their other interactions with teachers, the government lied. They did not fund our contract. Instead, when the time came to pay up, school boards around the province were told to make even more cuts; that further slashes to services were simply, "low hanging fruit."

Things are worse. They are so much worse. I cannot express how bad things are getting. Here is a picture of some books on the bookshelf in one of our classrooms, which remained there after the unusable material had been culled: 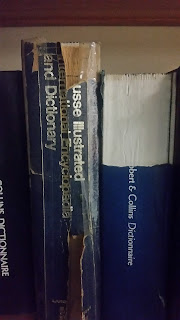 I
Understand, I didn't have to go searching for these books. I merely glanced at the first classroom shelf I came to, and there they were: books so exhausted they should have been retired. This is the state of many, if not most books on our shelves.

Next year, my resource class is expected to enrol 17 students with moderate to profound intellectual disabilities and/or autism. Back in 2002, when Christy Clark initiated the practise of tearing up signed contracts, such classes were considered large when they enrolled 12. A resource class includes students whose disabilities may be so severe they are nonverbal. They may be unable to walk. They may have severe behaviours, such as grabbing, pinching, hair pulling, biting, throwing and kicking. They may be students we call, 'bolters' - those who will run away from the school and potentially into traffic at the slightest distress.

The class may also contain students who are somewhat literate, and who want to learn work skills, life skills, and basic academics. They have the potential to get jobs and to lead independent lives, with some basic support. They may or may not have physical disabilities along with their intellectual limitations. They may or may not have autism and the consequent extreme sensitivity to sensory experiences, or enormous challenges with social interactions that they sometimes desperately covet. Many also have epilepsy, cerebral palsy, and other additional disabilities.

Imagine 17 of the students described above, in one room at one time. Seventeen used to be considered a reasonable size for a kindergarten class. My class was at a secondary school; the students were all fifteen to nineteen. Think about that for a minute: seventeen fifteen to nineteen year olds, some of whom aren't able to toilet themselves, feed themselves, speak or walk, and others who would love to learn everything they can to be as independent as possible. Think about organizing a birthday party or a sports event for these teens, and then think about doing that every day, day after day, and adding the requirement that each day they learn something that will help them in their lives.

Please don't misunderstand me. I love this work. I love working with these kids. I love working with their parents, who are frequently either cycling through the grief process as they watch their children miss more and more milestones, or, so exhausted they can only hope we can be their allies in the life shaping job of getting them to adulthood. I've loved this work since I was fourteen years old, and my grandmother spotted an ad in the Victoria classifieds asking for teenagers to volunteer at the horrifyingly named, "Victor Street School for the Retarded" (It was 1972). I was the only youth to stay the entire summer. Working with intellectually disabled teens has been my career for, if you include the early volunteering days, forty two years, and I still love it. A colleague of mine whose classroom is next door has told me on several occasions that when I came to teach in my latest job, she knew kids were learning because of all the laughter and joy she heard through the walls and saw on their faces.

It's because I love the work so much, that I have to leave. I've spent the last two years thinking about going. I've felt increasingly sorrowful that I simply cannot do all that these kids need and deserve me to do. It wasn't the administration: mine was supportive and empowering. It wasn't the school: I loved the school where I worked. It wasn't the parents. Parents don't really change much from place to place: they're all just people who love their kids to bits, doing the best they can under challenging circumstances. It certainly wasn't the kids.

What was it? Well, I spent half my day doing emails, meetings and paperwork. Half. My. Day. Ministry requirements for identifying disabilities have become increasingly onerous and stringent. Situations have to be increasingly desperate to qualify for funding. Ministry officials would no doubt say that they have remained constant, but in the climate of fear currently residing in school board offices around the province, boards have become more and more rigid and wedded to the paperwork, and less and less able to see the child behind the forms.

So in BC, as a trained and experienced Special Education Teacher, I spend a huge amount of my time doing paperwork and attending or chairing meetings. When I do teach, I have to choose which students to teach, because I cannot give a nonverbal child the one to one attention s/he needs to learn communication skills, while teaching the more capable students work and life skills. Of course, this means that I either bounce between them, or I focus on one group and leave the other group to the EAs with some direction from me. Whether that stands any chance of working depends on whether the EAs are able to manage independently. Some are, some aren't, and some get fed up with not having enough of my attention and lose interest.

It is with a heavy heart, then, that I leave BC. I am going north, to the Yukon, where I will be able to actually work with the students and maintain my mandate. I am leaving my husband behind to sell our house, and I am leaving three children and five grandchildren. I will fly home every chance I get, but I won't be here for their birthdays, Christmas concerts, and holidays. This is heartbreaking for me, because for me, my family is everything. But two years in the Yukon will increase my pension so dramatically that I will be able to retire and come home years sooner. And while I'm there, I expect to be able to actually do my job.

So goodbye, BC. Catch you on the flip side.
Posted by Cecelia Griffiths at 9:07 AM